Home › Home Inspection › How to inspect landscaping when buying a home.

How to inspect landscaping when buying a home.

Electrical service drop exposed to mechanical damage by vegetation; also, if left unchecked and the vines overgrow, they can create a condition where the wires can overheat.

There are awesome gardeners and landscapers who have done such outstanding work with their yards that home buyers have confessed that the garden or the landscaping was a huge factor in meeting the asking price of the home.  However, beyond the aesthetics, home buyers should be on the look out for drainage issues, vegetation growing against the house and how mature landscaping can save them money in terms of heating and cooling their homes. Improper drainage can cause several problems around the house such as frost heaving around the house and walkway and driveways, cracks in the foundation walls and footings and damp basements.   Good grading away from the house foundation is considered 1 inch per 12 inches for at least 6 feet away from the house. Overgrown vegetation against the foundation wall prevents it from drying properly.  General rule is about 1 foot away from the foundation wall.  Vines climbing on brick walls also prevents the brick from drying and is generally discouraged.   Also, depending on the type of vines (those with tendrils), the roots that attach to the mortar can cause damage when the roots get embedded in old mortar weakening the bond.   Over time, cracks may form and weathering takes over causing further damage and weaken the structure making it unsafe.  Also, removing the the roots is very difficult requiring scraping with metal wire brush and pressure washer. Vines such as Ivies, can also do damage around the roof lines, clogging up the gutters, and around the window sills or wood trims around the house.  Exterior cladding such as stucco is vulnerable to being dislodge by the tendrils.  They cause cracks in the stucco which when water enters and freezes, the stucco separates from the wall.  If the exterior is wood, it leads to wood rot as the vines traps moisture. 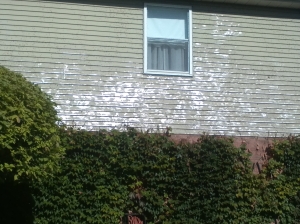 The home owner has trimmed back the vines from vinyl siding however, the damage to the exterior has been done. The vines attached to the brick exterior will take longer to cause damage to the mortar but eventually the vines will accelerate the cracking and spalling of the mortar and bricks.

It is possible for pests such as mice to use the vines to climb the wall and gain entry into the house via the roof vents or soffit vents.  Insects such as wasps may also find the vines favorable for nesting. Some perennials vines such as clematis or California grapes are great at hiding unsightly structures such as a damaged fence or gate.  Also, these perennials will not damage the mortar in the masonry or stone structures. Vegetation should also be trimmed back or removed altogether when they interfere with utility lines.  Overhead electrical wires should be clear from vegetation as safety issue.  Tree branches touching the roof should be trimmed away due to the abrasive action of the branches rubbing against the shingles.  The branches also provide access for pest such as squirrels and raccoons to have access to the house. Proper placement of the correct types of trees around the yard can save the homeowner money when it comes to heating and cooling the house.  The general idea is that  the southwest sun is hottest during the day, so during the summer you want shade from that direction.  The best tress to provide shade are the leafy deciduous tress such as Maples or Ash.  These trees loss their leaves in the winter letting the sun through and warming the house.  From the northwest direction, you want coniferous trees such as the pines or cedars as they retain their needles in the winter sheltering the house from the cold harsh wind from the northwest.

Cuong Luu is a certified home inspector specializing in infrared thermography. This is a technology that detect defects around the house that are not visible to the naked eye. It is non intrusive which means no dry walls or ceilings have to be removed. Expect more from your home inspector. Get the whole picture on your house, get an infrared home inspection.